EAA analysis on the risks and threats, from the global impact of the Ukraine conflict to the climate crisis, and the implications for East Africa.

After the downturn in global economies, we saw in the last two years with Covid-19, we expected 2022 to usher in an upturn.  However, the number of new cases globally peaked again in the last week of January 2022 as Omicron infections grew, with over 3.5 million daily cases reported.  This has since dropped significantly with 289,279 new cases reported on 28th May.

As we ushered in 2022, there was a renewed sense of optimism that the worst was behind us, and economic activity started picking up.  Unfortunately, the Russia-Ukraine crisis, China’s stance on debt relief and its zero-Covid policy, coupled with natural disasters brought on a more pessimistic outlook.  The IMF, in a recent blog, refers to this “a potential confluence of calamities”.

While 2022 was expected to be a year of recovery from the ravages of the pandemic, several risks and threats remain.  In this issue of the newsletter, we consider some of the most prominent of these that the world is facing in 2022.

The conflict between Russia and Ukraine began on 24th February and, as matters currently stand, it shows no tangible sign of abating.  As war continues to rage, the world is facing an extremely uncertain future.  In the first instance there is clearly a concern that the conflict could spread beyond the two countries to other parts of Europe and indeed towards World War III.  Widespread sanctions against Russia have been introduced by US and Europe and others aligned with them, though it should be said that these cannot yet be termed “global” as the UN has yet to approve them.  These come with numerous unintended consequences that are already impacting the developing world and while not globally applicable, countries around the world, including in Eastern Africa, will have to exercise care so as not to be seen to be busting sanctions.

The IMF has raised the concern of “geoeconomics fragmentation”, or perhaps put another way, a move away from globalisation.  The world has over the last three or four decades moved towards becoming a global village that has helped build economies and reduce poverty.  It has also, unfortunately, brought an over reliance by some countries on imports rather than bolstering local manufacture, resulting in income inequality.  But the Ukraine conflict, and to some extent the impact of the pandemic, have brought about a re-emergence of inward looking and protectionist policies.  Indeed, in their blog issued on 23rd May, the IMF has said that “around 30 countries have restricted trade in food, energy, and other key commodities”.  The impact of this, compounding the block on exports of key food products from Ukraine and restrictions on Russia’s, on basic commodity prices has been astronomic and is likely to continue to rise.

The World Uncertainty Index at the end of the first quarter of 2022 is moving in the wrong direction.  This is a new measure based on the number of times the Economist Intelligence Unit country reports used the word “uncertain” or a variant of it.  The latest index has shown a marked increase in the use of the term when reference is made to the conflict.

The conflict has the potential to bring down both the Russian and Ukrainian economies.  Added to this is the impact of Russia cutting gas supplies to swathes of Europe which could well have devastating effect on the global economy.  The risk of default by Russia, although perhaps not by design, is also a concern. 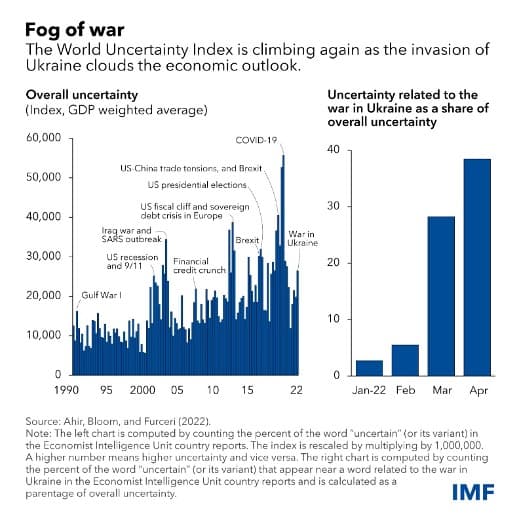 The World Trade Organisation (WTO) in its Trade Forecast 2022-2023 raises similar concerns.  According to the WTO, the conflict is hurting global trade with the greatest impact likely to be on the poorer countries of the world.  Their economists have reduced the projection for trade volume growth from 4.7% to 3%.

The World Bank has forecast that Europe and Central Asia economies will contract by 4.1% against its pre-conflict forecast of growth of 3%.  The impact of this on Africa, including the Eastern Africa region, could be enormous.  According to the Bank, “The war has added to mounting concerns of a sharp global slowdown, surging inflation and debt, and a spike in poverty levels”.

Clearly this conflict is the key threat to global economies during 2022 and depending on how long it continues, for the foreseeable future.  The war also poses the greatest threat to regional peace in Europe since the Second World War, and potentially augers a wider conflict.

China’s influence around the world is growing at a rapid pace.  The country’s “Belt and Road Initiative” is seen as a mechanism through which it establishes new markets for its exports and a means to expand its economic presence around the world.  China is expected to spend USD 1 trillion on this initiative in 130 countries, including 40 of the 54 on the African Continent.  While this may seem like a good opportunity for these countries, the reality is that indebtedness to China is increasing rapidly and with it the possibility of assets pledged as collateral being seized.  Sri Lanka has already gone through this.  What is very clear is that China will not be as forgiving on debt repayments from many countries and this is becoming more evident in the current economic climate.  Sri Lanka has already had a port taken over by the Chinese and there may well be more to come.

China will chart its own path, and this is likely to become evident with US sanctions imposed on Russia, Iran and North Korea.  In March 2022, when the USA imposed sanctions on Russia, the Chinese Embassy in Washington said: “China decides its own position and policy based on the merits of the matter itself, we will continue to play a constructive role in seeking and achieving peace”.  This could be a double-edged sword for China which is the major exporter of goods to the West.  Having said that, China is not alone in continuing to trade with Russia despite the sanctions.  The danger for other parts of the world is that they too could be ignoring the call for sanctions through continued trade with China.

Interestingly, China has introduced its own sanction regime following the trade wars with the US under President Trump.  The country has what is known as the “Unreliable Entity List” which lists those that “harm China’s national sovereignty and development interests” and those that “breach internationally accepted economic and trade rules” according to Comply Advantage.  This development brings a new dimension to China’s increasing role in global matters.  Sanctions have already been imposed on individuals and companies in the US and Europe.  The decision to impose sanctions is likely to be a retaliatory measure.

The country’s economy is facing a significant slowdown brought about mainly by two factors: firstly, the Chinese real estate bubble appears to be seriously deflating, if not actually burst, and secondly, the country’s zero Covid policy is having a significant impact on its output.  This in turn, will no doubt impact other economies in the world.

Whether you believe that climate change is a man-made phenomenon or simply a cyclic change in weather patterns, the fact remains that natural disasters are increasing and creating havoc in many parts of the world.  The United Nations recently said that in the last 50 years there has been a five-fold increase in extreme weather events.  This may not seem like a significant increase but what is clear is that such disasters are having significantly more impact on the world, and in particular the poorer communities in the developing world.

Advanced warning systems have improved over the years, but despite this, the devastation to human habitats and financial loss has increased.  Effectively, the world is seeing increased temperatures resulting in heatwave, forest fires, hurricanes of greater intensity and droughts in many parts of the world.  There is no reason to suppose that 2022 will be any different, and indeed in the first five months of the year, there have been several.  It is anticipated that these events will have a considerable impact on agricultural activities and human habitats.

If one accepts that climate change is a man-made issue, the question must be who is to blame?  The poorer countries in the world, which accounts for 88%, lament the fact that the issue was created by the other 12%.  Yet this is a global issue that every country in the world is now being asked to address.  The cost of doing this, both financially and socially, is going to be high and represent a cost that the developing world can ill-afford.

The threat of cyber-crime is on the rise, and countries, corporations and individuals are feeling the pressure.  Hackers are having a field day and some of them are clearly state sponsored.  The Institute of Chartered Accountants in England & Wales list the top five risks as ransomware; phishing; data leakage; hacking and insider threat.  There have been several instances of all of them being successful and no doubt we will see more going forward.

As the world becomes more and more digitalised, the threat of cyber-crime increases exponentially through the internet which almost everyone uses today.  Perpetrators of crime are no longer by definition someone in the vicinity of the crime, as in the cyber era a criminal can simply be someone somewhere with an internet terminal.  Therein lies the risk – one cannot know it is coming until it actually impacts.

Protecting and preventing cyber-crime is likely to be a significant opportunity going forward as criminals become more brazen.  Following the work at home syndrome that came with Covid-19, the threat has widened.  Studies show that during this period there was a marked increase in phishing attempts.  But it has not stopped there as we witness more brazen attacks on State and Government owned enterprises – a frightening trend.

The flow of illicit funds continues to plague the world despite the best efforts of the Financial Action Task Force, the global body established to combat money laundering and terrorist financing.  A number of countries have been placed on its grey and black lists.  The unfortunate part of this is that these are countries that most parts of the world deal and trade with – the UAE and Turkey among many others.  Getting caught up, even inadvertently, in a money laundering type of scandal is a clear and present danger to businesses and countries.

But where do these funds end up as tax havens become more transparent?  More often than not in Europe, the UK and parts of the Far East.  Indeed, London has already been dubbed “Londongrad” for obvious reasons.

The Eastern Africa region is in no way exempt from the risks described above and is already impacted by some of them.  There are also risks and threats that are more localised – an election in Kenya in August, Al-Shabaab activity, the Tigray conflict to name but a few.  We are just as exposed as the rest of the world, so beware and plan accordingly!