Commentary: Opportunities and Risks in the region, Members’ Survey July 2021

THE INVESTMENT CLIMATE, RISKS AND OPPORTUNITIES IN EASTERN AFRICA

In our membership survey, we wanted to get a measure of business sentiment at a time when we expected the region to start making a recovery from the pandemic. As it happened, when the survey kicked off, covid cases were again surging in to a more virulent third wave, so from general conversations, we gauged that business confidence was wavering.

However, the responses to the question we asked, as to whether respondents expected their business and their investment to grow or not, were quite optimistic. More than 70% said that they expected their business to grow in the next 24 months. Perhaps this was born out of a sentiment of “the only way is up” after the pandemic decline: business has taken a big hit during the pandemic so it must surely be the case that as vaccinations are rolled out and economies open up again, then of course business will grow. But had there been greater caution on this front, linked to concerns about the ability of countries to vaccinate, about the degree of indebtedness resulting from the pandemic and structural damage done to economies, we may have expected to see many more responding in at least the “stay the same” category. 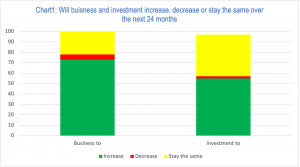 Perhaps more revealingly, fewer – but still just over half – said they expected investment in their business to increase over this period. This represents a vote of confidence when caution would have dictated sitting tight before committing to greater spending. It is likely that such caution is behind the position of the large remaining minority which foresees no increase in investment over the next 2 years.

But overall, this result shows that, despite the massive shock to the global economy and the general risk climate (see below), a majority of businesses continue to see the Eastern Africa region as an attractive destination for investment, with a wide range of locations and sectors being targeted by respondents, as the opportunities section, below, will show.

Where will business invest?

We specifically asked members, if they were going to increase their investment, in which jurisdictions they would do so. Some 35% said Kenya, with Uganda at 15%, Tanzania, Ethiopia and Rwanda next up with 10% each. A plucky 4% said South Sudan and DRC.

That Kenya continues to dominate is no surprise, given the breadth and relative strength of its economy, and the range of opportunities to invest from a well-established base.
We suspect that, had we asked the same question a year ago the figure for those heading to Ethiopia would have been considerably higher, with declining interest being a reflection of the impact of conflict and instability sadly engulfing the country at present.

Tanzania may have attracted zero votes until recently given the hostility that met investors under the previous President and, while it’s still early days, it’s encouraging to see members beginning to show an interest in the country again. Assuming the moves to improve the investment climate for international investors, heralded in many of President Samia Hassan’s pronouncements, are actually implemented, we can safely assume investment will significantly increase in Tanzania in time.

In the survey, we wanted to gather views on how members viewed the biggest opportunities and risks in the region. As answers in these sections were free form responses, we grouped them into general headings which involved a bit of interpretation, but we feel the results reflect the spirit of responses. 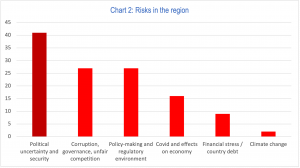 Looking at the risks section first, the answers were very clear with a top three emerging as highly repetitive themes.

Political risk and uncertainty with its old bedfellow security, topped the charts with around 40 responses. The next two categories, which are easily conflated, we separated out into two reasonably distinct areas. One is unfair and illegal practice, including corruption, often but not exclusively government-related; the other reflects an opinion that government’s policies and decisions are poorly conceived. Both, “corruption and governance” and “policy making and regulatory environment” were perceived as being top risks by more than 25 respondents each.

For many, these three areas of risk are just strands of a common thread of political risk more broadly. That these categories sit so prominently at the top of the league table may not come as a surprise to many in the region, but for a seasoned observer of political risk this is a remarkably high overall aggregate figure even for the riskier emerging markets globally, where volatile or corrupt politics are prevalent.

Concern over political risk in our region is of course heightened by the pending election cycle in Kenya, where many members have interests, and the uncertainty this brings. More broadly across the region investors are used to seeing a high degree of manipulated political processes in some of the countries, erratic decision making and corruption, which can also explain these views. And we see significant swings brought about by political decision making which can fundamentally alter the investment climate: in Tanzania, such change can be for the good; in Ethiopia the perception is that politically things are going in the wrong direction.

But in the age of a once in a century global health crisis, the fact that only 15% or so saw the impact of Covid on the economy as being the most significant risk is also remarkable. It should be noted that some of the responses in the next category (“financial stress / country debt”) may also be linked to pandemic effect, although the concern here was principally driven by the level of indebtedness racked up by governments in big spending programmes.
When it comes to opportunities for investment in the region, responses were far more widely-spread across different categories that we extracted from members’ answers.

At the top of choices was technology and the digital economy. It has become mundane to say that the pandemic and restrictions on public life have acted as a spur to the growth of the tech-enabled economy. East Africa is no exception to this with an explosion of digital innovation enabling diverse sectors from e-commerce, digital healthcare and accelerated use of financial services.

Safaricom in Kenya saw an increase of 70% in data usage after the initial period of lockdowns in 2020. Solutions have been developed in remote medicine supporting COVID responses and other conditions. There are multiple new payment systems and micro-insurance systems to pay for healthcare services, a trend observed by Control Risks and Oxford Economics in their 2020 Africa Risk Reward Index publication. And in the huge agricultural sector, which still suffers from low productivity, mobile platforms which enable every section of the food supply chain are becoming ever more popular. 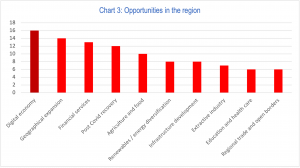 A key observation about digital economy developments in the region is that technology is being deployed not necessarily to disrupt existing industries, which has been the model for success in digital start-ups in the developed world, but more often to meet a basic unfilled need. So, in Kenya, the mobile money revolution was successful because it addressed the lack of financial inclusion – simply put, most people didn’t have access to any form of financial services. And there are countless other examples across the agricultural, education, health, energy, commerce and logistics and other sectors.

The Control Risks / Oxford Economics report observed that in 2019 equity funding in the tech sector in Africa had reached $2.02bn, up 74% on the previous year, itself 108% increase on the year before. So, it’s fair to say that the opportunities respondents see in this space, particularly when taken together with other opportunities (tech + agriculture, tech + energy, tech + financial services), are very real and also attracting funding, thus of key importance to the future of the region’s growth.

Geographical expansion continues to be seen as a significant opportunity, with respondents citing it in second place after technology developments, a point also addressed earlier in this article. What this tells us is that, from a base in, say, Nairobi, investors believe there is plenty of room for developing their business from a hub into, for example, Uganda, Tanzania or Ethiopia (the countries cited most frequently in answers in this section).

To this we would add what we see as a key driver of opportunity to look out for, namely the regionalisation of trade and opening of borders, which was also cited by respondents as a top ten opportunity. In recent months we have seen an acceleration of trends in the region to ease trade restrictions which run counter to EAC ambitions for regional trade integration, and a greater political drive from leaders with renewed interest in opening borders from an (until recently) recalcitrant Tanzania, enthusiasm from Uganda and engagement even from the likes of Burundi. Add this to the benefits that will accrue over time from the Africa Continental Free Trade Agreement, and the prospects of a much larger market emerge in a region where investors struggle to gain depth within the confines of a single country’s relatively small domestic market. Of course, without improved infrastructure, much of this greater cross-border fluidity remains relatively theoretical, so investments in road and rail links and port developments are also highly significant as well as being an important area for investment in their own right.

As we noted in our last newsletter, renewable energy is already of significant interest in the region, and respondents spelled this out in our survey. At the same time, the more traditional oil, gas and extractive industries have received a number of boosts in recent months with the revival of the LNG project in Tanzania, agreement to build the EACOP oil pipeline from Uganda to Tanzania, Uganda oil production agreements, and Tanzania’s moves to re-engage with international mining companies. With world prices for commodities moving north again, investments in these areas are becoming more attractive again.

Finally, it would be unfair not to highlight the third most cited opportunity, namely in financial services. A fair proportion our of members operate in this space, but they are not alone in calling out this sector. The developments in financial inclusion have already received much attention and these are still prominent opportunities in markets across the region, with Ethiopia the greatest untapped one so far. Pension and insurance reform beckon, and Kenya and Rwanda are vying to act as hubs for capital inflows into the region.

Covid and its aftermath will also be a driver here, as cash-strapped governments struggle to meet development objectives and rely more heavily on private investment. We can expect these factors to boost private lending to companies aiming to fill this gap and chase other opportunities, as countries seek to “build back better”. Control Risks / Oxford Economics remarked in their report that a number of the countries in the region had made significant progress in developing their financial market infrastructure, and the outflow of foreign capital in the initial stages of the pandemic would prompt efforts to consolidate these gains.

There is more one can say about these different opportunities than this short analysis permits, and we look forward to taking a deeper dive into the different areas of opportunity in future newsletters and member meetings.