The pandemic continues unabated and as at 13:28 GMT on 26th January 2021, there were 100,378,111 people infected and 2,152,249 deaths recorded. The charts below have information extracted from https://www.worldometers.info/coronavirus/#countries – although the numbers are clearly changing minute by minute. As always, it must be remembered that the data is only as good as what is being reported. 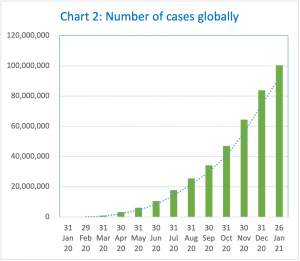 The third wave of Covid-19 does now seem to have hit the world, although arguably some countries may still be in the first wave! In addition, are new strains of the virus that have emerged in it is believed 31 different countries. The first new strain was identified in the UK in the middle of December and it is reported to be up to 70% more contagious, but the steep rise in cases may also be a result of the festive season and people simply dropping their guard.

Many parts of the UK have now gone into the top level of lockdown and this is much the same in Europe and South Africa. The US continues to show steep rises in infections and deaths – again in all likelihood due to the elections and the holiday season which started with Thanksgiving and went on through Christmas. There could well be a further surge following the shambolic assault on the Capitol Building on 6th January as thousands of unmasked, and certainly not socially distanced, protestors went on the rampage. It has already been reported that at least three members of Congress have been infected following the assault. India, on the other hand, is showing a dip in numbers.

As cases rise globally, the number of deaths have gone in the same direction. While, the new strain of the virus does seem to reflect less serious symptoms, there is no doubt that there are those that are just as seriously ill and may well succumb to the disease over the next few weeks.

It does appear, however, that the vaccines already developed, do cover the new strains. However, the virus will continue to mutate and one can but hope that the existing vaccines continue to provide protection.

The global distribution of cases has shifted and the UK and many European countries feature in the top 10 in terms of the number of infections. Those countries had shown significant decline toward the end of 2020 but have now been impacted by significant surges. The USA continues to lead the world accounting for 25% of the cases globally. 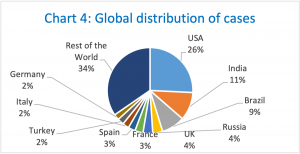 Looking at cases by continent, North America has moved to the top of the list with Europe closely following. Asia has now dropped to third and Africa, while still relatively low, has exceeded 3 million cases of which nearly 40% are in South Africa. Even with the surge in numbers in Africa, it is clear that the virus is not impacting the continent as much as it is in other parts of the world 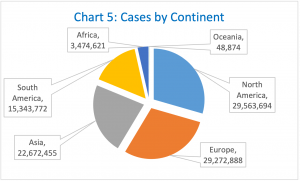 There are nine countries in Africa that now have in excess of 100,000 cases which account for 76% of the total cases on the continent.

Ethiopia, perhaps much as expected given the current civil unrest, has seen a surge in numbers since late last year. Kenya, while slowing down at the moment, has crossed 100,000 cases. Uganda has also surged and may well become worse with the current election campaigns. 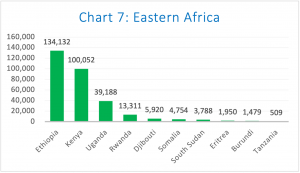 A difficult question to answer given that the virus seems to be rapidly mutating into something that is far more contagious. The vaccine programme should give some relief and the limited data currently available does suggest that it works to curtail the spread of Covid-19. The reality, and this is something the WHO have said, is that the virus is here to stay, much like many of its predecessors, but that the pandemic will end and the world will move into an endemic. Effectively, Covid-19 is here to stay in a very similar manner to the common flu.